A newfound trail running paradise in a remote corner of Switzerland

At the most eastern point in Switzerland, there's a little peninsula sticking into Italy, the Val Müstair. Sitting on the edge of the Swiss National Park, the last remaining true natural landscape of the Swiss Alps, the Biosfera Val Müstair nature reserve has a commitment to organic farming and preserved traditions.

This valley is somewhat isolated and protects its Romantsch culture and language with a little different feeling in the region compared to the rest of Switzerland. It's friendly, beautiful, and buttery Bündner nusstorte can often be smelled on the streets of the village, Santa Maria. Santa Maria sits directly at the bottom of the Umbrail Pass, which until recently was a gravel road descent done after climbing the Passo Stelvio. Cyclists stream through the narrow streets on their way over the Ofenpass, while exploring all the many dirt roads and trails, and famously riding the Passo Stelvio loop.

I had ridden these roads numerous times but never knew what the mountains held just west of the Umbrail Pass. There, directly above one of the world's most famous passes to road ride sat another kind of paradise. This one, for trail runners.

For our run to Lai da Rims, the famed turquoise lake above Santa Maria, we were joined by Aline from the local tourism office. The trail started steeply uphill after a bus ride up the Umbrail Pass. We immediately gained 500 meters to Piz Umbrail before dropping down soft scree and smooth dirt all the way to Lai da Rims. By this point, we'd already noticed that we'd found something special. All that remained of our run with Aline was about 5km to Santa Maria, and we were not at all ready for the day to be finished.

What caught our attention, and what will certainly be the main reason to return, were the many high ridge lines arcing above us. Long and seemingly smooth on their crests, Aline assured us that most of them could be connected with either unofficial trails or easy cross country.

We didn't have the time to start exploring the ridges, but did make a detour to Piz Praveder just west of Lai da Rims. From its summit, we saw deep into the Val Mora, a long, open valley that stretches all the way into Italy. And we got a better look at the ridges we plan to come back to explore.

From the top of the Piz Praveder, we faced a daunting 1500 meter descent all the way to Santa Maria. Not especially excited for the quad pounding, were were surprised not to find a single unpleasant section of trail. After countless, "This is AMAZING," comments, Aline stopped and asked, "But isn't every trail in Switzerland like this?"

No! The Val Müstair has set a new standard.

We're presenting this run as we did it, and it's fantastic. But fully intend to return for a bigger circuit taking in the high ridge lines. There's more to discover here including the new Biosfera Trail, a multi-day running tour that showcases the region and includes much of this run to Lai da Rims.

Fast & fun, the Val Müstair trail quality will have your flaps up

Aline, our local guide for what we decided are some of the Alps very best running trails

Climbing to the Piz Praveder above Lai da Rims

On Piz Praveder with Val Mora far below

This is AMAAAAZING! All the way to Santa Maria.... 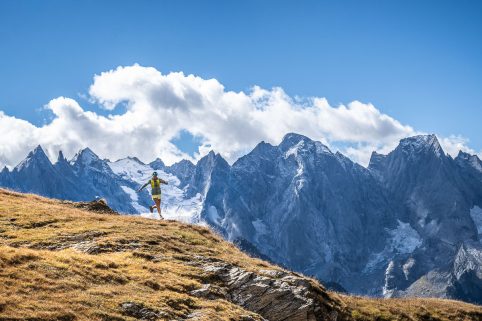 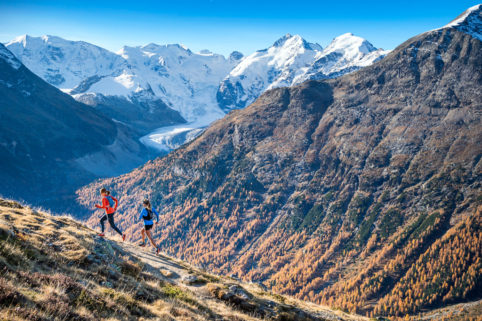