A tour with everything through the Alpstein mountains and its highpoint, the Säntis

Running the Säntis popped into our heads as we decided what to do to kill a day while passing through eastern Switzerland’s Alpstein mountains. After having done one of our book runs there, we knew the Alpstein to be one of the best places in the Alps for fall colors.

The highpoint of the region is the 2500 meter Santis, a ridiculously popular peak for hiking and eating thanks to a massive tram to the top where several dining possibilities await. We knew it would be a busy place, and truthfully, questioned if it was for us.

But, from where we planned to start, in the small village of Wildhaus on the mountain’s south side, we immediately saw that the fall colors would make the day well worth a busy summit.

The route begins like most every other tour in the Alps, up a forested trail that gradually opens to wider views at treeline. With the Säntis, it’s hard to miss your objective thanks to a 125 meter red and white tower perched on top of the peak. The tower is for scientific research on lightning strikes, which based on its very existence should serve as a reminder that maybe the Säntis gets struck a lot and might not be the best place in a thunderstorm. Hint hint.

Our trail up took us to the Tierwis Hut on the ridge west of the summit. From there, we merged off our silent trail and into heavy traffic flowing at decent speeds to the summit. This section, while busy, was fantastic thanks to steep, solid, fun scrambling to the final cables and ladders to the top.

Once on top, you’ll pass through a tunnel which exits onto the summit platform where you’ll immediately be greeted by Swiss chaos. Which isn’t so much chaotic as it is densely packed with humans who didn’t come up any trail. That, and the smell of cheese.

We rushed through all this and quickly found our trail down, which to our disbelief, was completely buried in snow. Our intention was to descend the Lisengrat southeast to the Rotsteinpass, which I had done years before and knew to be a beautiful route full of easy rock scrambling and exposure. Today, however, it all looked very questionable. We struck out fully on display in our running shoes and shorts for the masses dining outside, front pointing into whatever snow didn’t face south, and punching through whatever snow did.

After a mix of light alpinism and trail running, we reached a section of north facing, frozen, steep, exposed snow that was the key to the whole descent to the Rotsteinpass. Thanks to all these adjectives, it wasn’t happening.

There, along with several other failed hikers, we sat and ate what food we had left as we all looked out on the uniquely beautiful Alpstein. A mini-mountain range with complex, twisted terrain, deep valleys, and a color palette that doesn’t seem quite real. We love the place, and can’t recommend it enough. It's not just for killing a day, it's a worthy destination all on its own.

With the need to still get down, the route we chose was a different, and tiny path, south off the Lisengrat. But for what we offer here, we’ll go ahead and provide info on what we set out to do, which was to descend the Lisengrat to the Rotsteinpass and then follow valley trails back to Wildhaus via the Fliser Schofbode and the way we started up.

Lonely, perfect singletrack through the Alpstein mountains en route to the Säntis.

As you get closer to the Säntis, you feel like you are in bound to a space station.

The final ascent to the Säntis summit is on rock, with steep sections of ladders and cables.

Descending the Lisengrat off the summit can be done on trail, or the ridgeline. We opted for dry rock over deep snow.

Back on trails after leaving the snow behind. 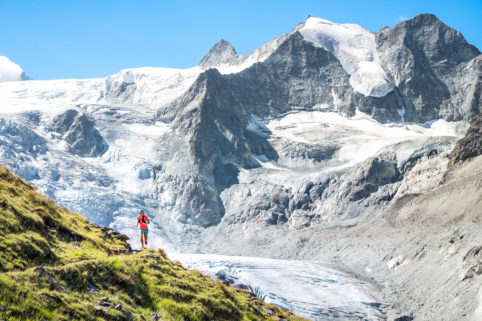 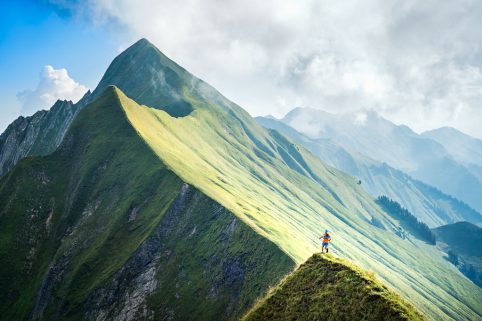 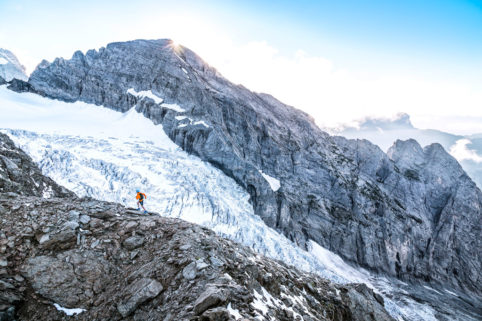 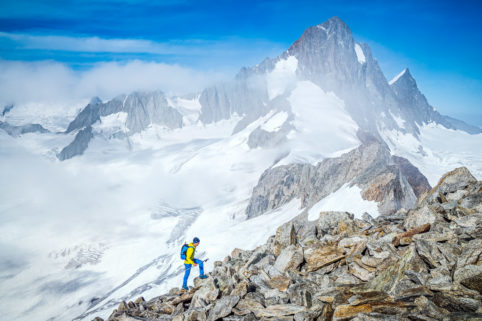