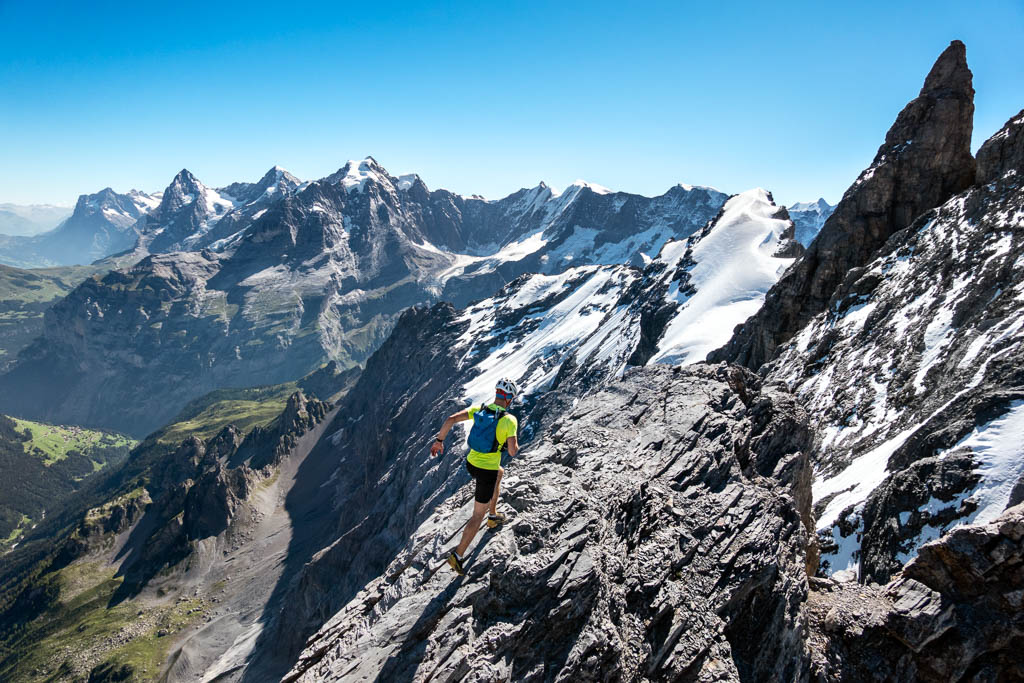 
A perfect Way Up for climbers who trail run   ⇑

Combining a 1000 meter tall north face with a shark fin profile, the Gspaltenhorn catches most everyone’s attention. It’s a peak that tourists always ask, “What is that?”

The mountain lives up to its name. “Gspalte” means “split”, and from the west side, the peak is a series of sharp towers. Nowhere does it seem to have a friendly line. But its northwest ridge is a relatively easy route, thanks in large part to some lengthy fixed ropes. This is not a peak for the inexperienced, rather it's for the runner-climber combo pack.

Starting in the very back of the Kiental at about 1150 meters, a steep trail follows the Gamchibach as it twists, falls, and roars its way down from Griesalp. Once in Griesalp, the route becomes almost entirely runnable to kilometer 8, where it’s painfully clear you haven’t gained much elevation, and a whole lot of mountain is towering above you. In fact, 1000 meters remain in just 2km.

From where the trail splits to the Gspaltenhorn Hut, it’s time to dig in and claw your way up. Poles are very helpful, make that mandatory, to the Büttlassasattel (there are some oddball names on this route, hang in there) at 3019 meters. It’s  steep, loose and slow going. Additionally, you’ll be in the direct line of fire should there be rock fall from the Bütlassa. Wear a helmet and don’t linger. Save that snack break for when you get to the ridge.

From the Büttlassasattel, the northwest ridge of the Gspaltenhorn takes shape. You’ll make your way up some steep trail to where scree turns to rock. Thankfully, the rock quality directly on the ridge line is far better than what you’ve been seeing. Stay more or less on the ridge, following both bolts and a zillion scratches from crampons.

At roughly what’s called the Böse Tritt, is the crux of the climbing, where a short, very exposed down climb is required. Graded PD+, or II, the rock is solid but a slip, or broken hold is going to have serious consequences. Experienced climbers will do much better here than runners with no climbing background. This route must be taken seriously as a climb.

Above the Böse Tritt, is the first of the fixed ropes - a fat diameter rope allowing the passage of a vertical step. You’ll most likely hand over hand up until things back off, then switch back into 4WD drive mode until the next fixed rope that protects a big, loose slab. Remember, these ropes protect the route when it is both dry and buried in snow.

The final ridge to the top gets easier and you’ll be happy that there is not a false summit, it’s the real deal and you can happily pull up to the massive view that awaits. If you're working your way through our Runs and Way Ups, it's worth noting how many routes can clearly be seen from this summit. If my count was correct, I spotted ten.

In descent, the crux section is actually much easier since you'll go up instead of down on the exposed moves. Once off the ridge get your poles back out, it's time to do some steep scree-ing all the way back down to the main trail. Instead of making a right turn and heading for the bottom, make a left at the trail and you'll be at the Gspaltenhorn Hut in only about 2 minutes. If you're like us, you'll be ready for a drink, treat and chill time on the deck before the cruise back out the valley.

While you're in the Berner Oberland you might also consider some of our other Way Ups : the Wildi Frau, Balmhorn, Hockenhorn and Gasterespitz. 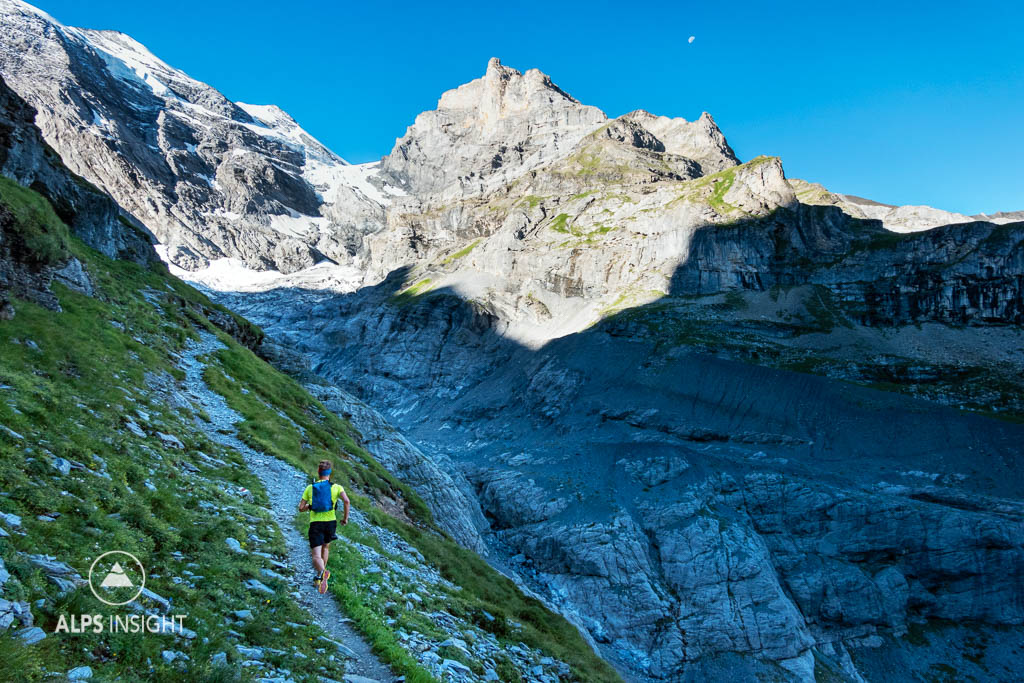 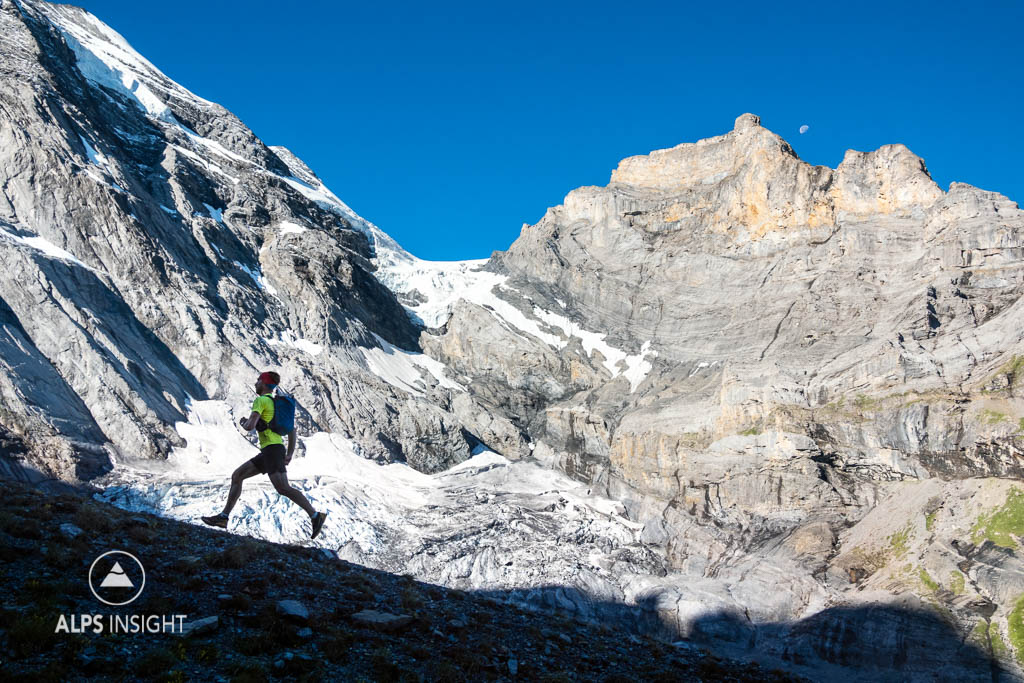 The moraine trail to the Gspaltenhorn Hut. The rocky peak to the right is another Way Up, the Wildi Frau. 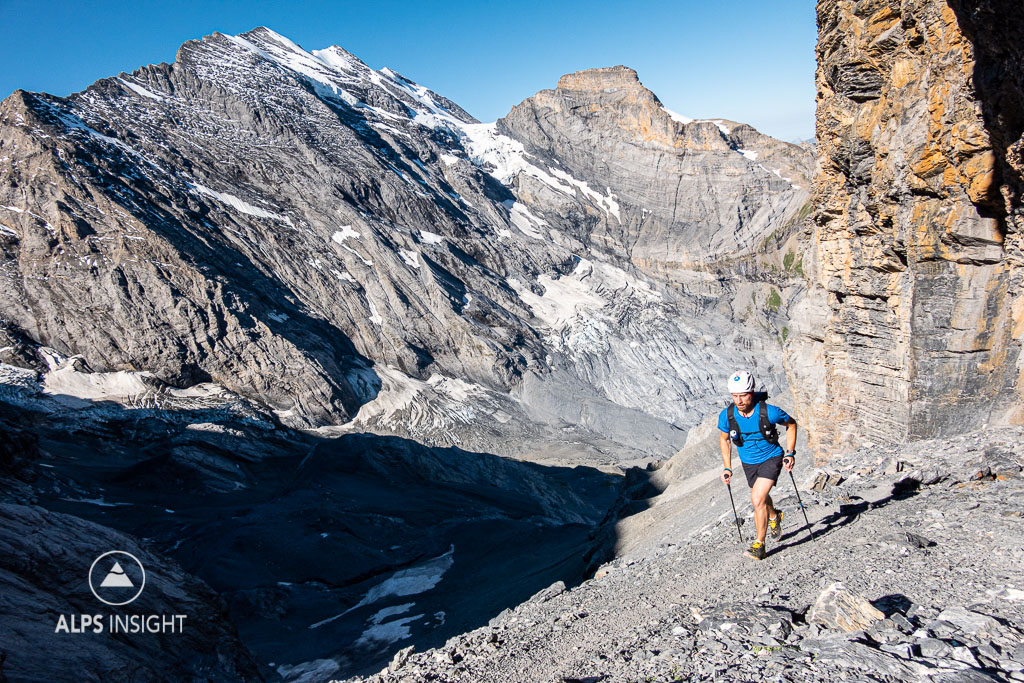 Florian on the way to the Büttlassasattel. 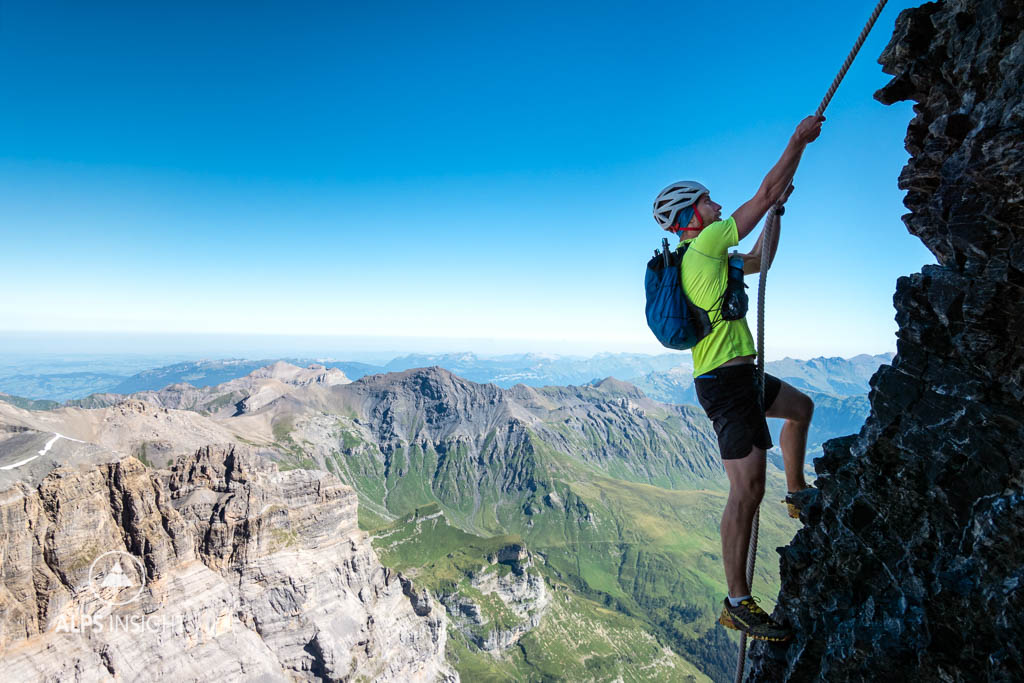 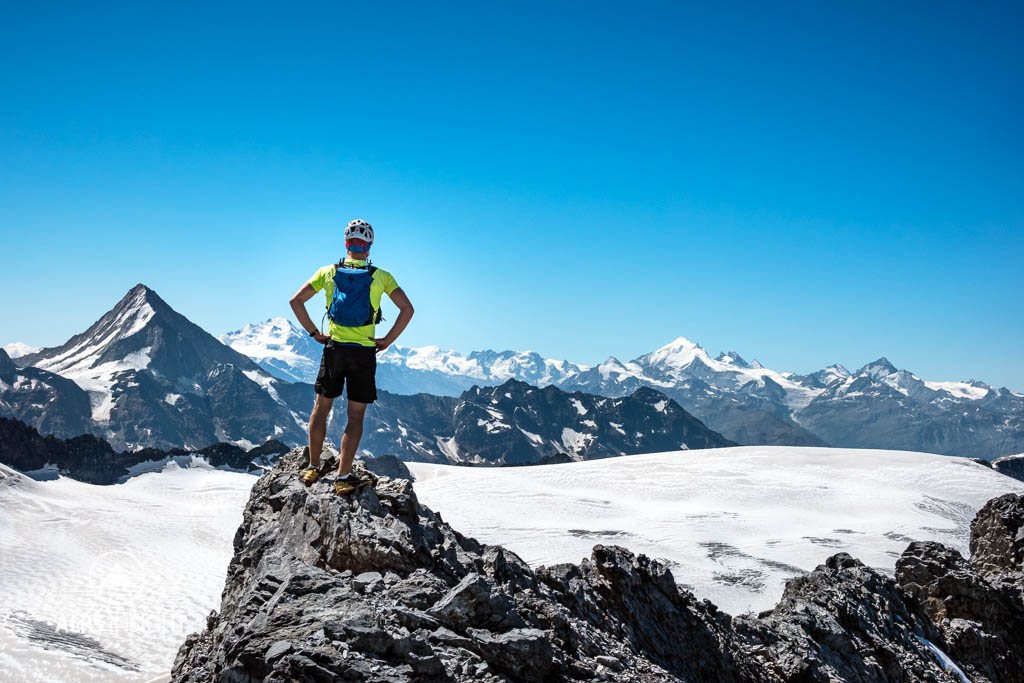 Gspaltenhorn summit with views south to the Valais. 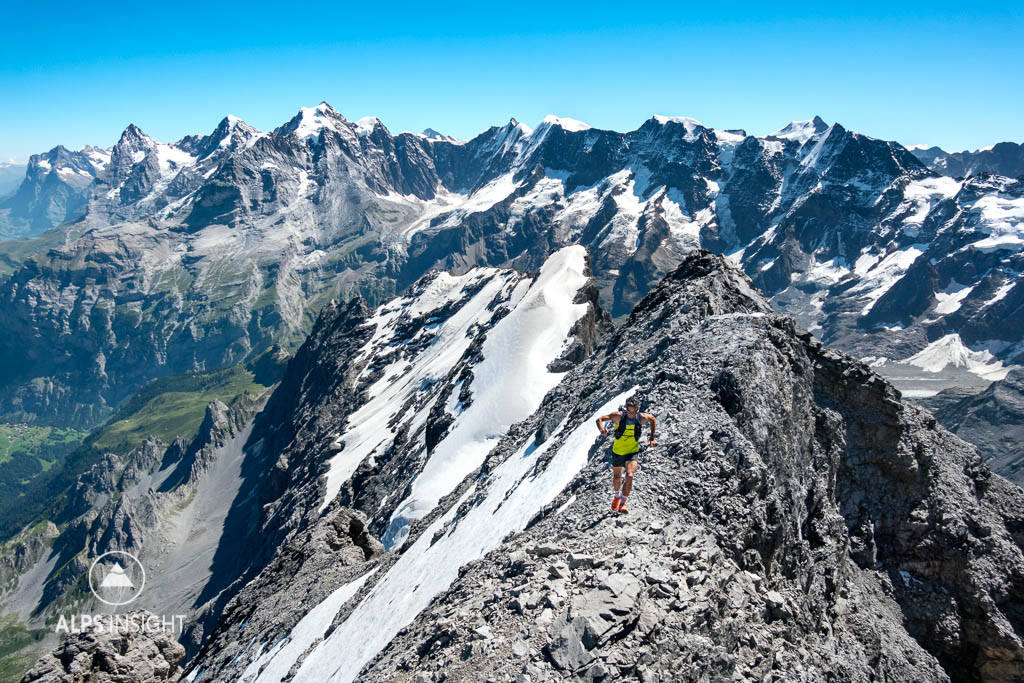 Exploring the summit ridge line with views to the Jungfrau Region. 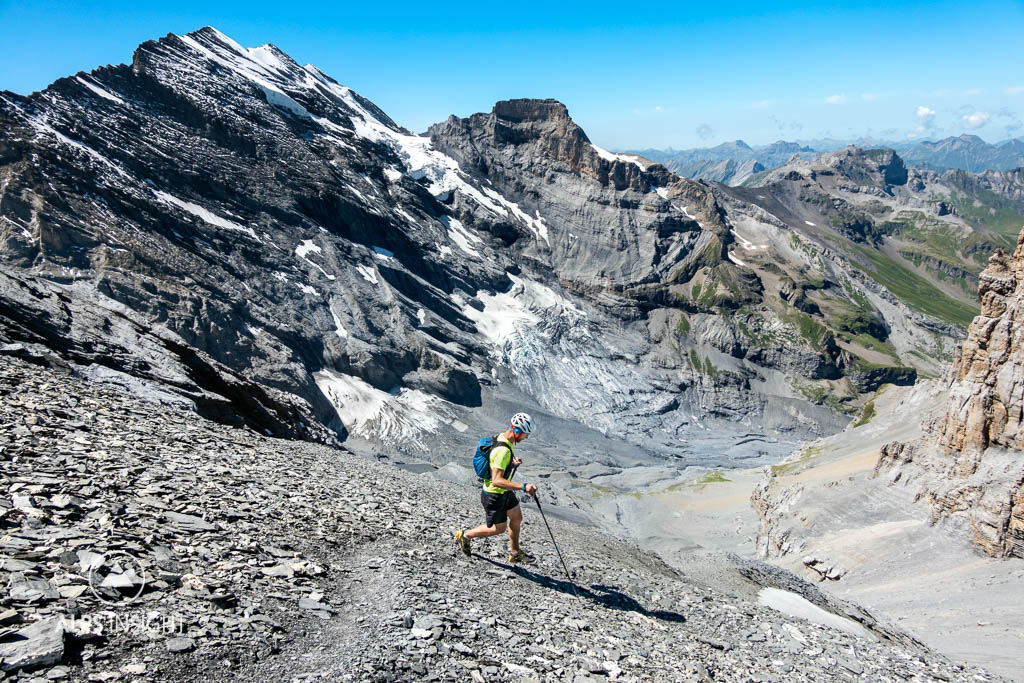 Florian dropping in to the steep scree descent. 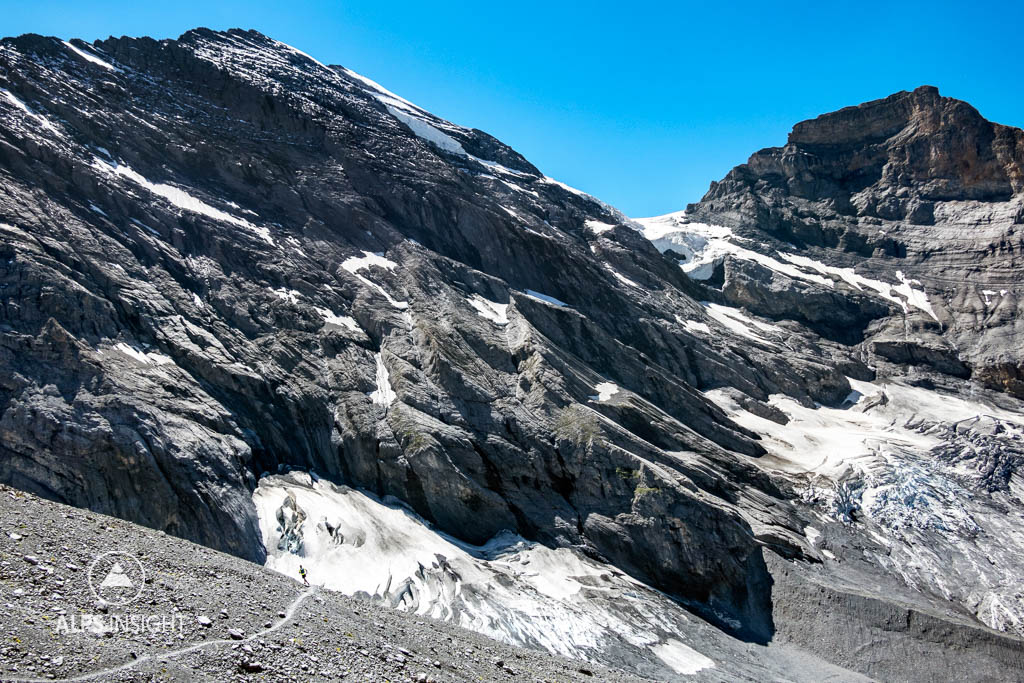 Just below the Gspaltenhorn Hut the trail flows like this for several kilometers. 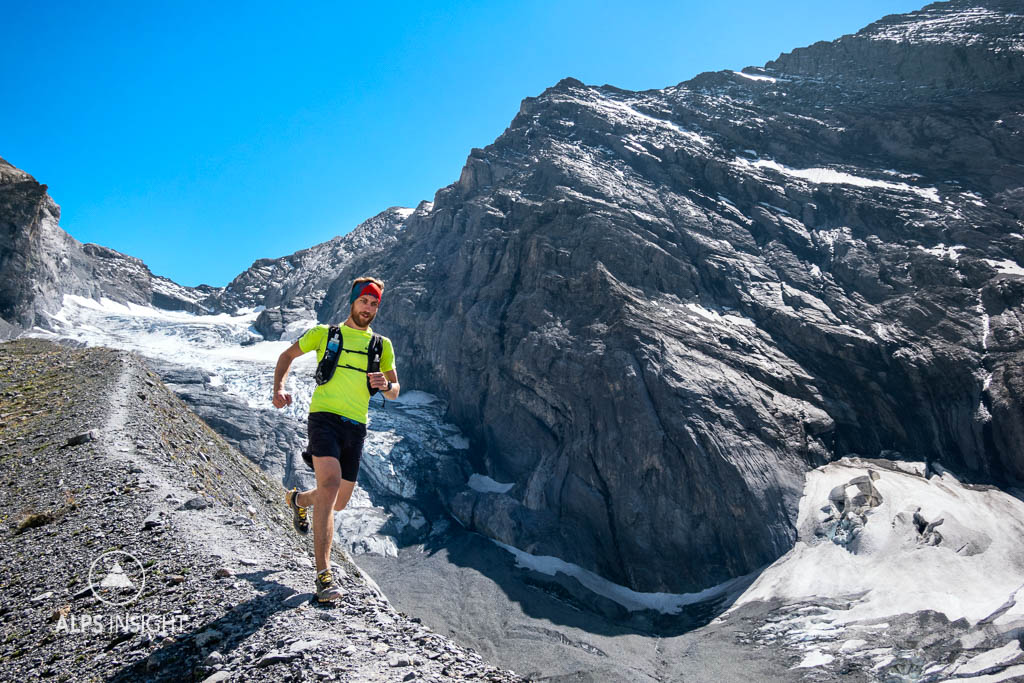 Running down the moraine trail below the hut with what's left of the Gamchi Glacier behind. 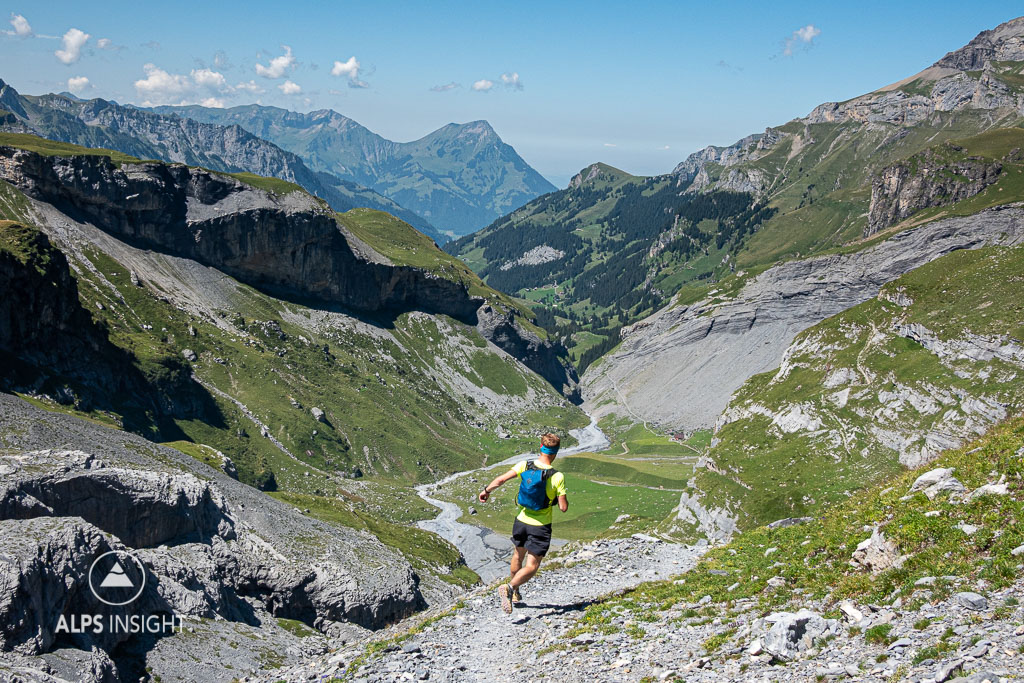 Out of the alpine and bound for the hot valley below - how it looks in the opposite direction. 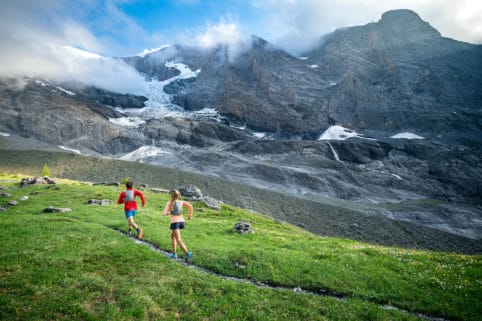 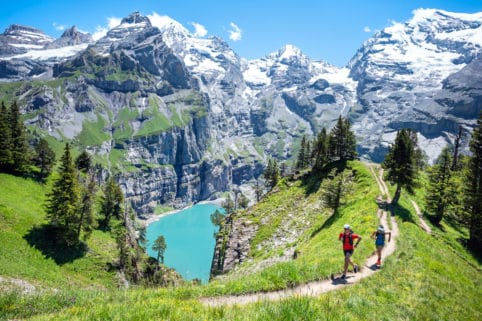 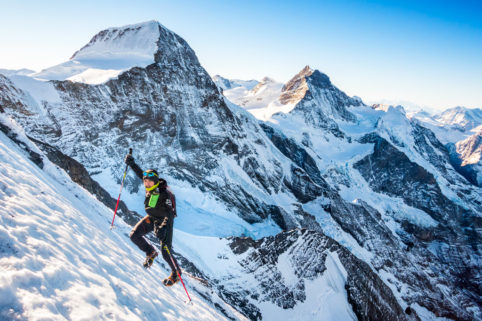 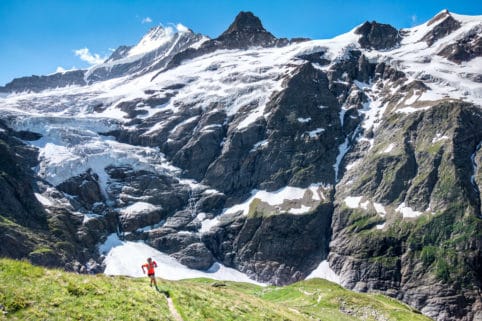