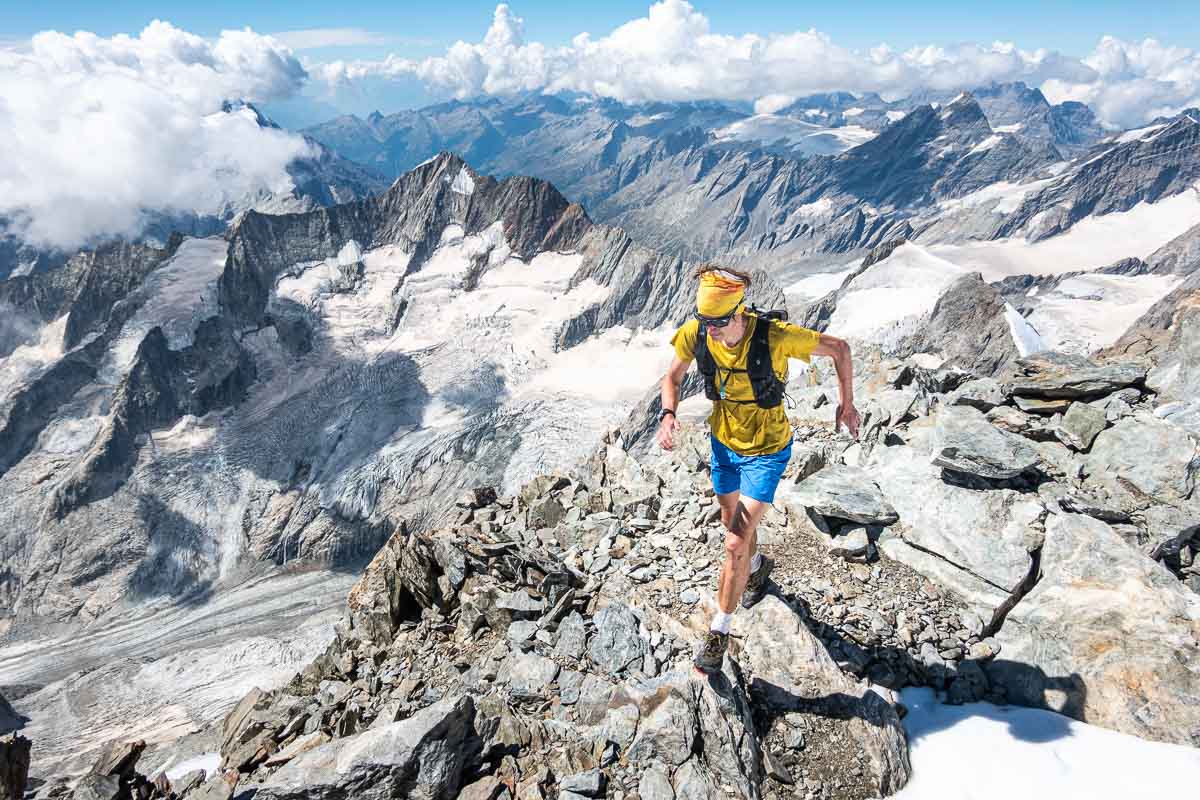 Will it continue to be traditional mountaineering or become a mountain run?

A few weeks back, I got an email from Remco Graas asking if I’d be interested in joining him for a run up the Aletschhorn. We’d never met, but he’d seen our Black Diamond film, we’d seen his and it seemed pretty clear we’d be friends. I was shocked to hear the southwest ridge “Normal Route” was snow free and a running style ascent could be possible. I made it a priority to pull this off with him.

On August 28, the same weekend as such notable trail races as UTMB and Trofeo Kima, Remco, Kim Strom, and I set out at 4 am to see if we could “run” up a peak with a reputation for being more like an expedition than a standard climb.

Time will tell if the 4195 meter Aletschhorn will remain a mountain that trail runners can do as a “run,” but in the smoking hot summer of 2022, it was not only a mountain run, it was a mountain run done in shorts and a t-shirt.

Done car to car from Blatten b. Naters, it’s about 40km and 4100 meters of vert. And these numbers don’t do justice to what this peak involves. It’s clearly a big day, but when you’re out there, it’s a monster. It’s more than what we typically call a Way Up (#thewayupalps), it’s a Way the Fuck Up (#thewaythefuckupalps ?)

A beautiful trail leads from Blatten to the Oberaltesch Hut. But even here, things are tough, and plant seeds of concern for the return. 1300 vertical meters separate Blatten from the hut, yet you’ll ascend more than 1600 getting there. Once at the hut, another 1600 meters is necessary to the summit. But first, you lose about 200 meters dropping to the glacier, far, far below the level of the hut. Pack a strong mind.

Once you descend the steep ladders and cables to the rock glacier, the landscape feels wild and remote, more Himalayan than Alp-like. It must be one of the most remote places in all of the Alps. To drive that point home, phones don’t work all day - and this is Switzerland.

The rock glacier requires a 2km trudge up fairly solid, but potentially icy, footing to the base of the Aletschhorn. Now, it’s time to get to work. A newly built trail leads up and left, following permanent wands and trail markers to a flattish plateau at the base of the southwest ridge. This is where Kim turned around on the mountain, still feeling the effects of a recent bout of COVID, but managing a 35km, 3000m+/- round-trip slog.

Once on the ridge, a fairly obvious line leads directly up to the glacier higher on the mountain. We found that sticking right on, or very close to the crest was the best terrain for moving quickly. The ridge is primarily boulder hopping and very easy scrambling on stable granite.

At 3350 meters, the ridge ends abruptly at the glacier. Here, the route is going to vary year to year, but in 2022, the glacier was mostly dry allowing relatively easy passage to the dry rock ridge higher up. Nevertheless, we roped-up and encountered crevasses that tested our long jump skills.

Once off the glacier, at about 3650 meters, we remained on dry rock all the way to the summit. It’s in this section that the 2022 high temps and lack of precip allowed for a mountain run ascent. The final ridgeline, typically a mix of snow and rock, is the standard crux of the route. Here, posts protect steep, lose sections of climbing, and allow for abseiling in descent. We found entirely dry rock and after about 150 meters of AD scrambling, reached the summit. We’d seen just four others on the mountain.

The descent went on for a very, very long time. Thankfully, there is the Oberaletsch Hut with caffeine and cake available.

Much like the Eiger West Flank that we also have on the site, this is a mountain to take seriously and absolutely not for anyone without extensive mountaineering experience. Strength and experience in trail running is not going to cut it for this one. A full mountain background is mandatory or it’s pretty likely you'll get into some trouble. The Aletschhorn’s difficulty comes in its very size, distance, conditions, loose rock, route finding, glacier skills, and especially how truly “out there” it is. Pulling this thing off safely is as much about knowing when you can do it in this style as it is actually doing it. Who knows if it will be possible to repeat in running shoes and shorts anytime soon. But if it is, and you are absolutely certain it’s a peak your skill set and fitness allows for, then it’s an exhausting day well worth having. 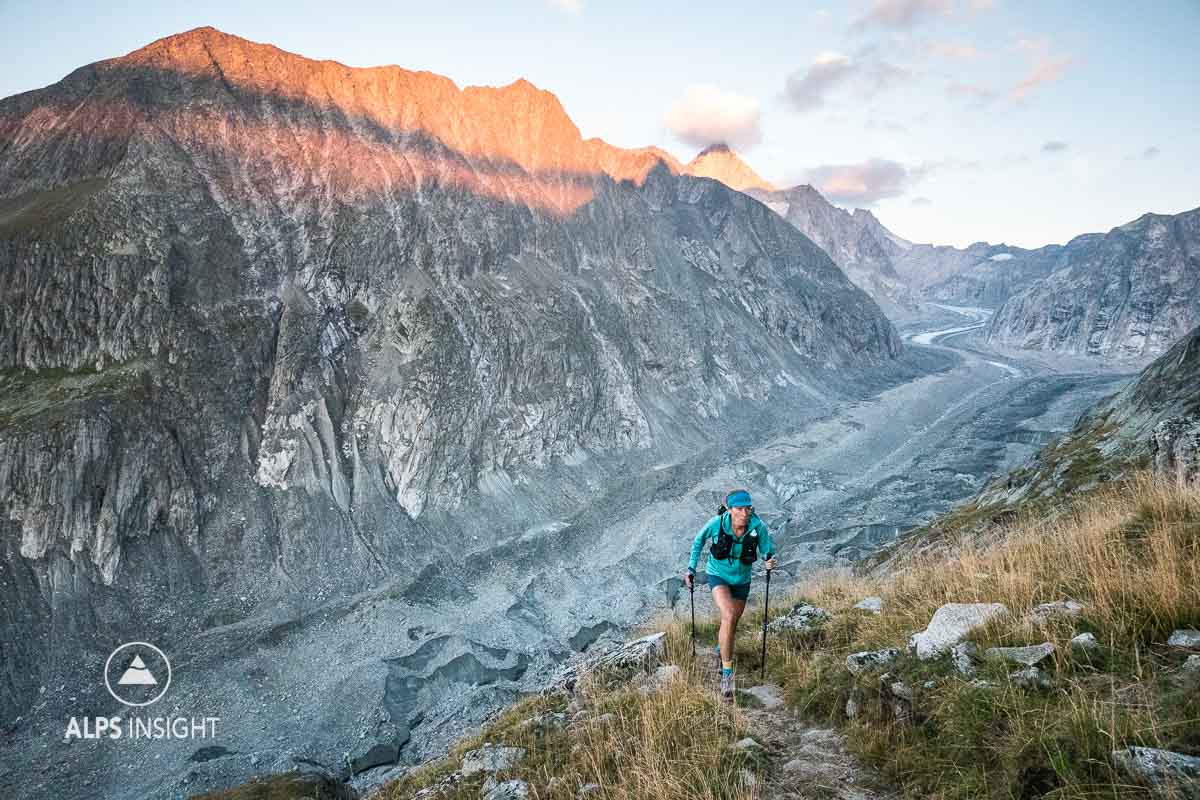 Kim making her way to the Oberaletsch Hut. 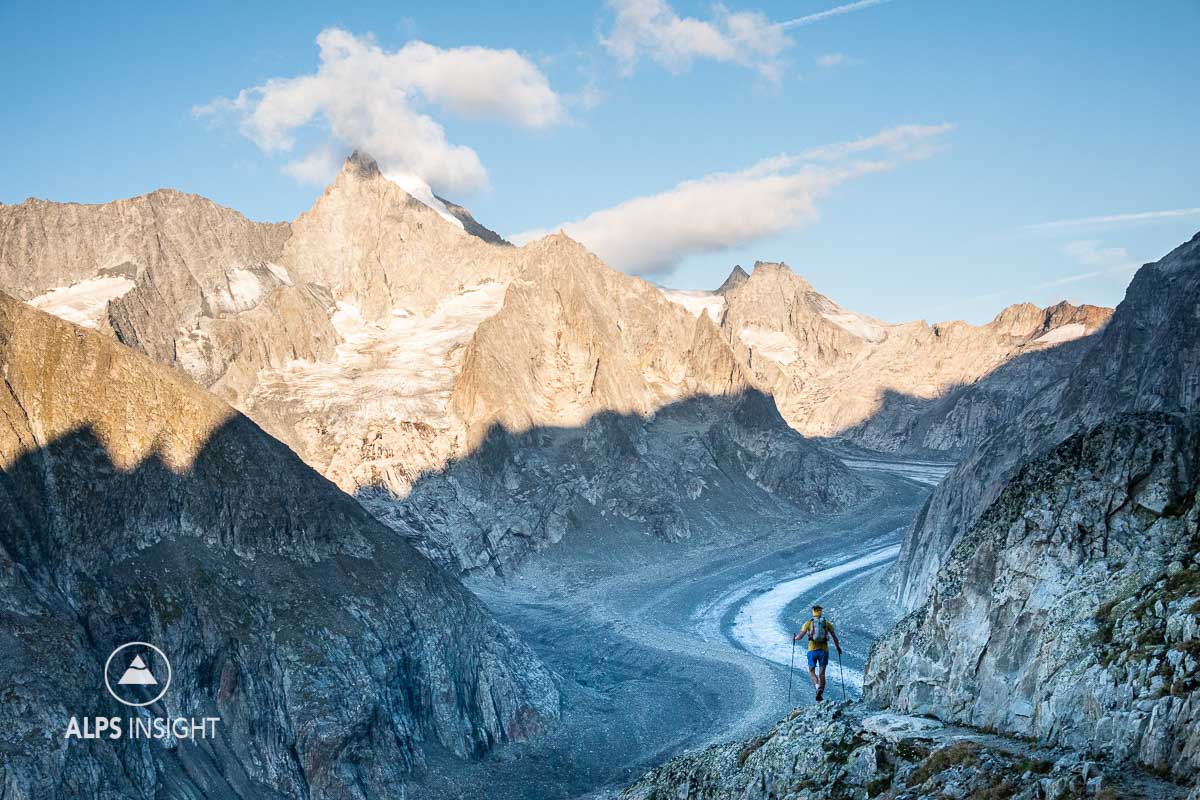 Remco going down up to the hut. Ya. At least the views kept us distracted by what we'd have to go up to go down. 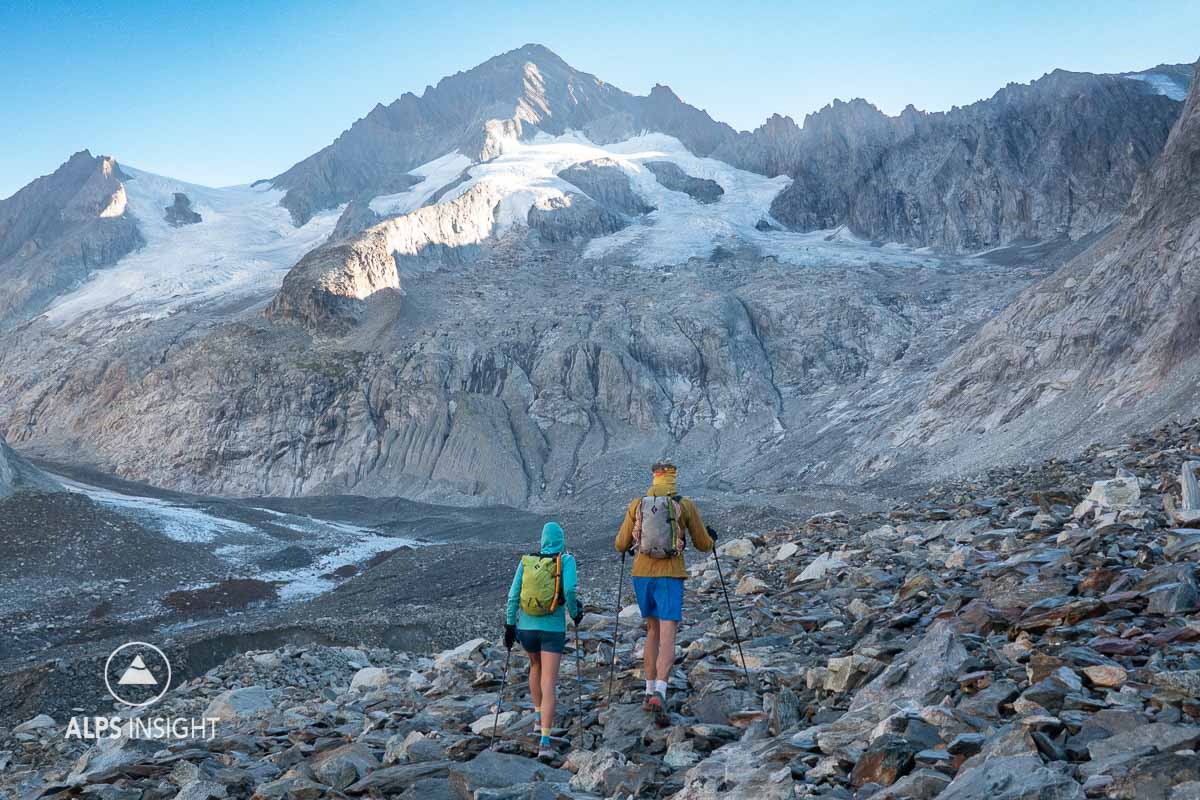 On the rock glacier thinking, "That all looks pretty big." 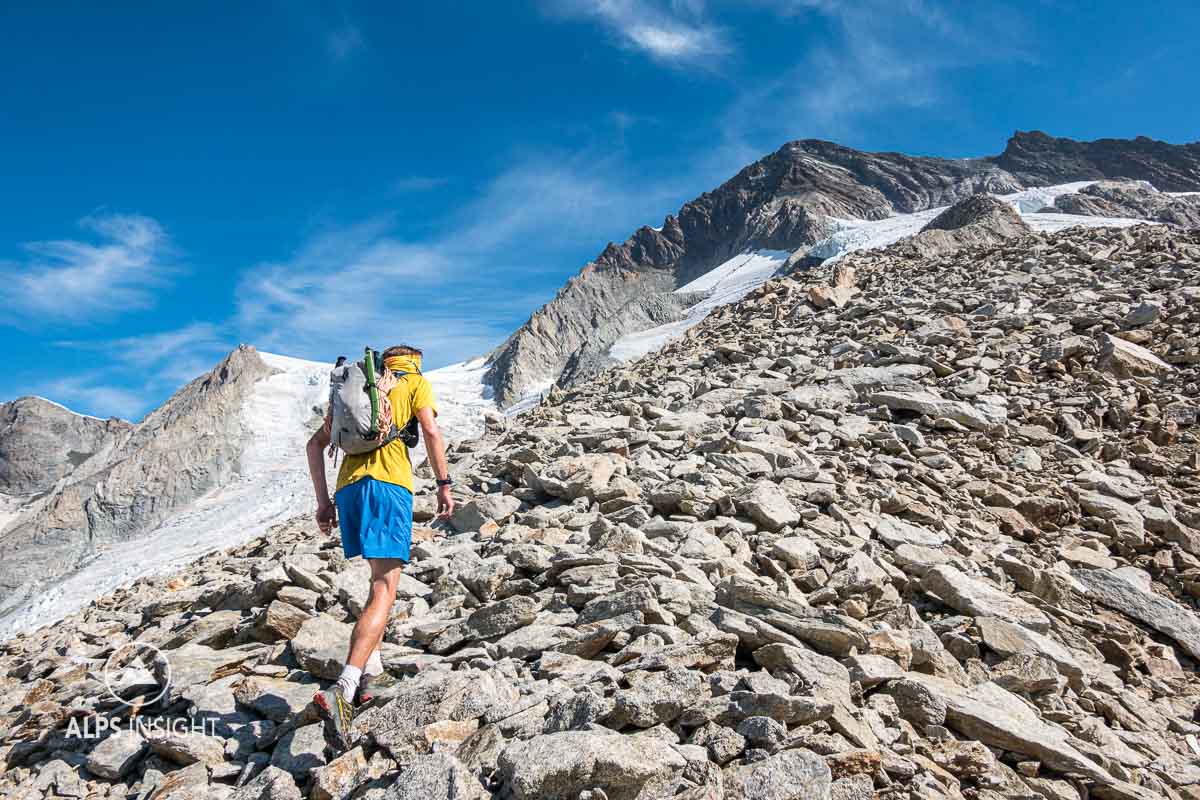 Low on the Aletschhorn's Southwest Ridge. Lots of this. Lots. 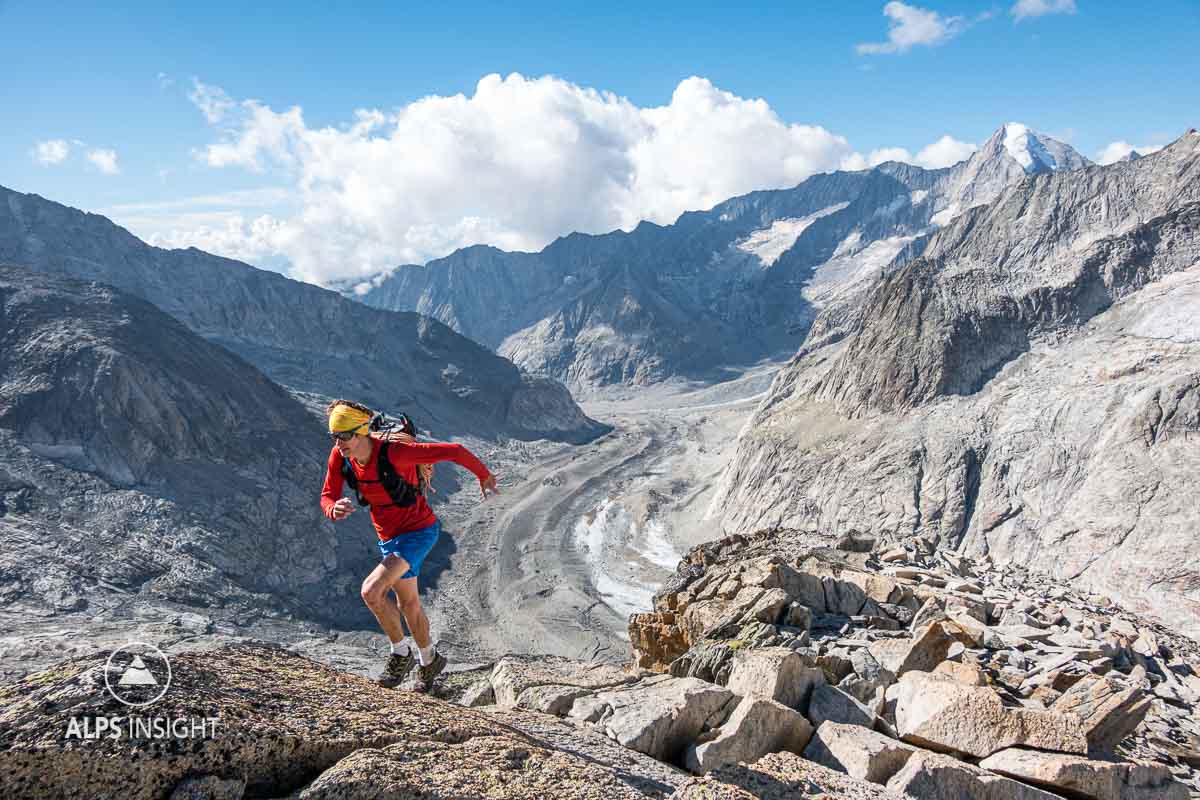 Remco with a spring in his step low on the route. That spring would snap near the top. 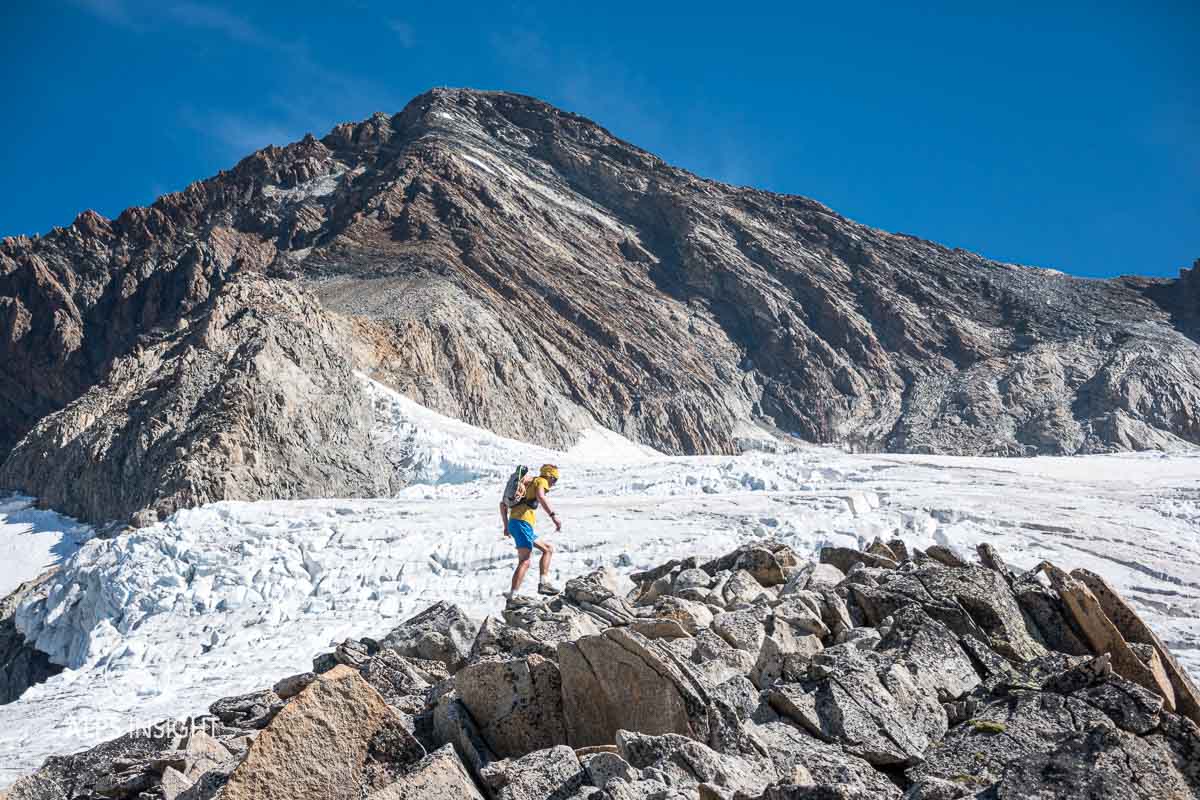 The route continues up the blunt ridge to the summit. 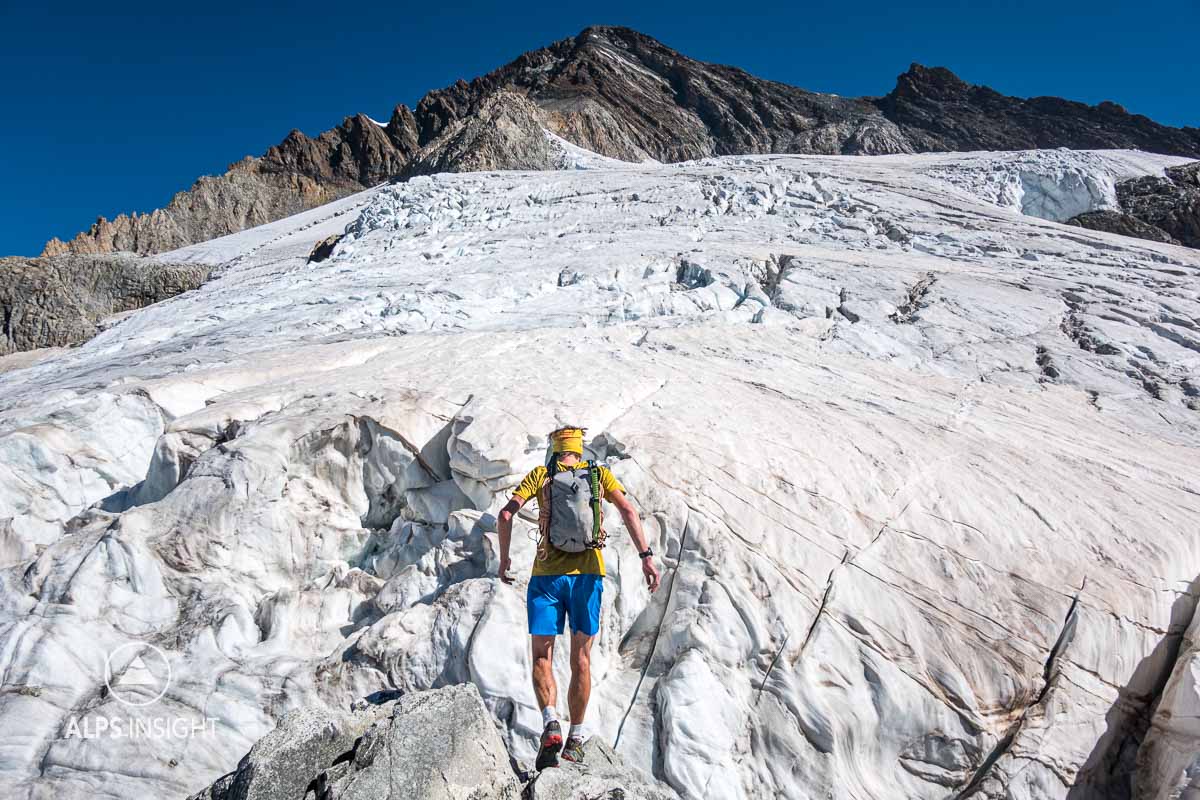 Time for some glacier travel before more rock above. 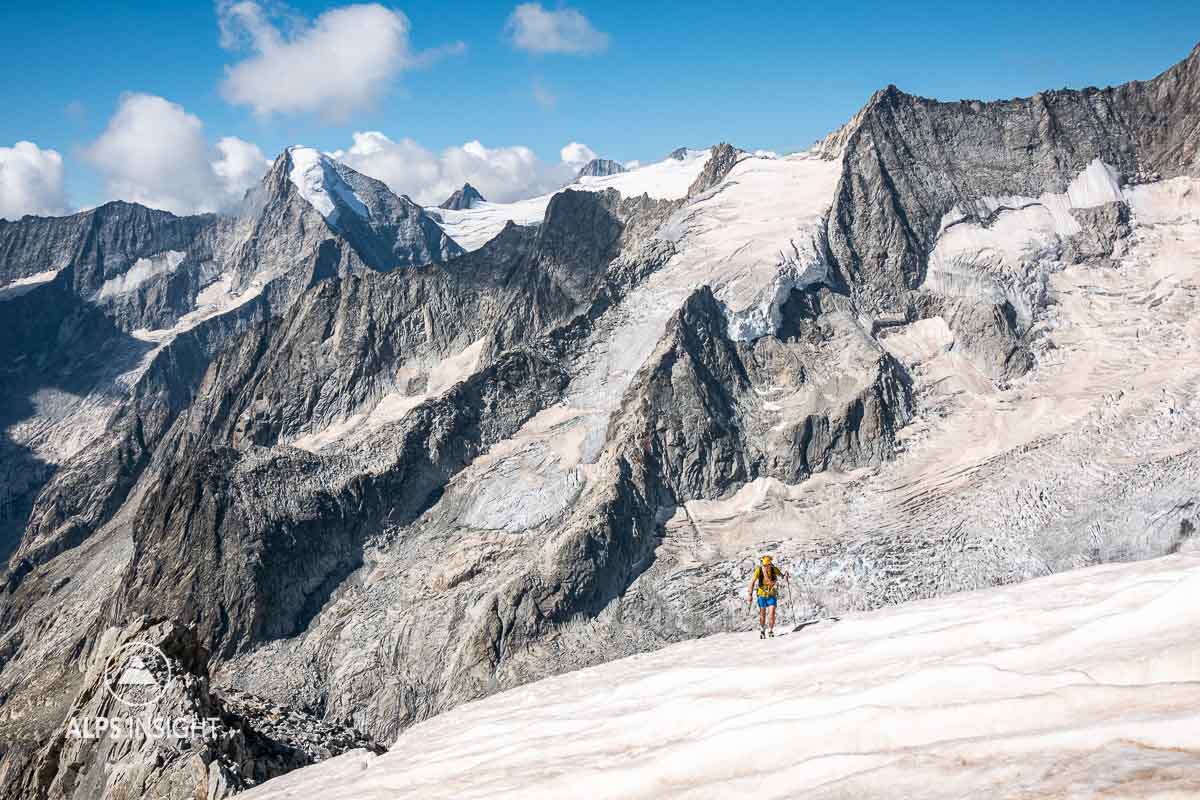 Remco making his way up the glacier. 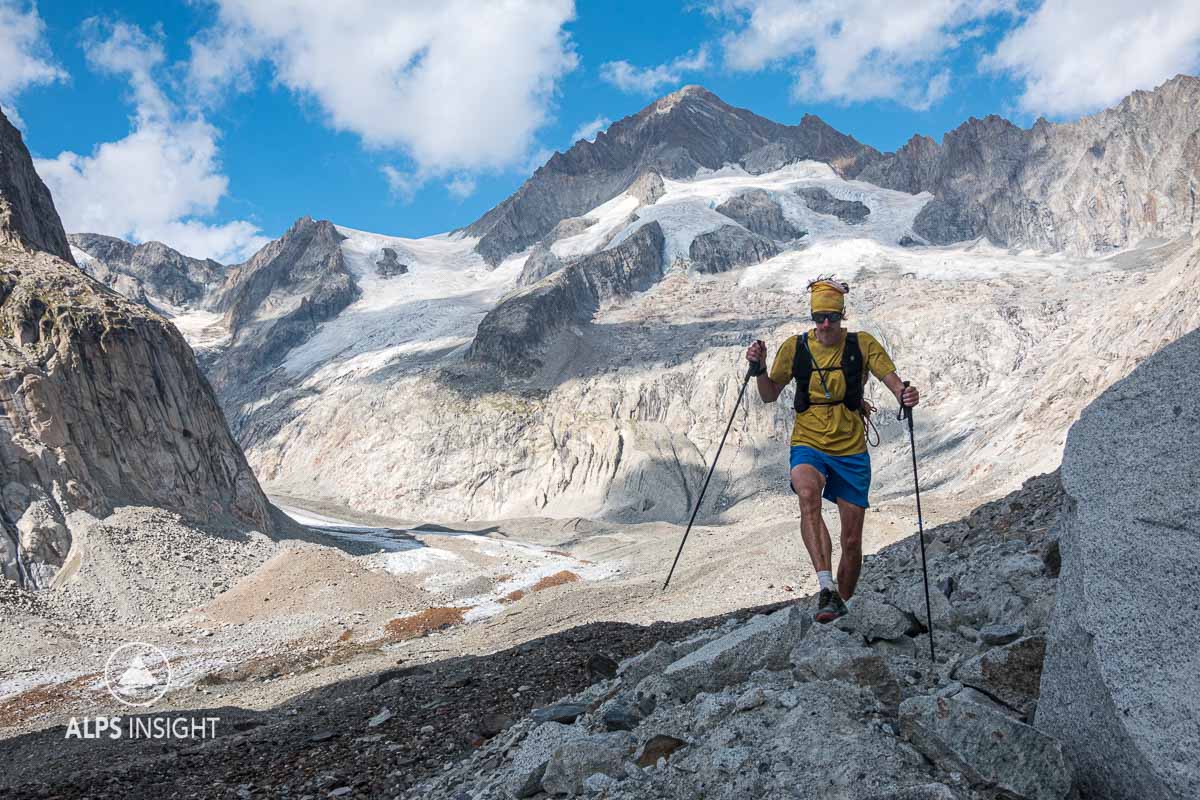 After a long descent and a long rock glacier, it's time to climb 200 meters of ladders to the hut. 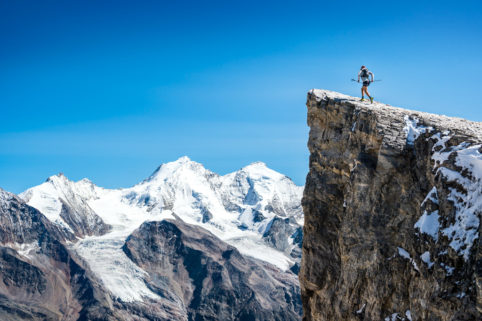 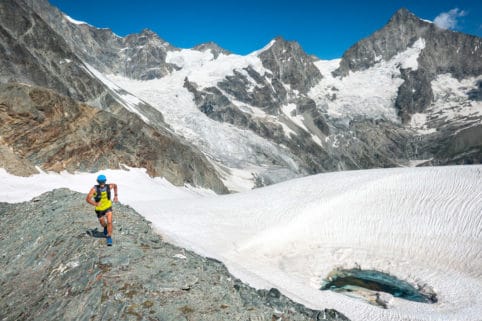 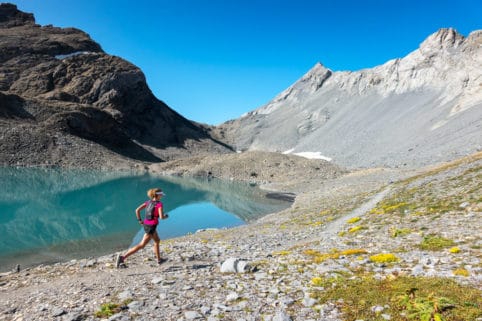 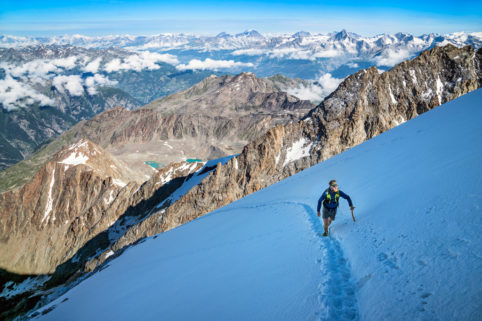